Save The Date - April De LaB 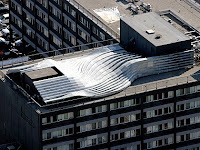 Save the Date! Our next de LaB will be on Saturday April 4th
Blue Velvet brunch/ tour of roof garden with Alexis Rochas in association with LA Art Weekend

We're working out the details now for our first daylight de LaB event and will post those as soon as we confirm the time. In the meantime, here is some info on the project we'll be touring:

In a city covered by over 4,000 square miles of asphalt and cinder block, the green roof movement may have just won a serious coup with SYNTHe, an urban rooftop garden prototype designed by SCI-arc professor and architect Alexis Rochas. Located atop the Flat, a downtown Los Angeles residential mid-rise building, SYNTHe is a fertile oasis in the sky that will ultimately grow a variety of edible plants. Through an active collaboration between students, faculty, and city officials, SYNTHe proves that green roofs could indeed have a fruitful future in LA.

SYNTHe is a self-sufficient ecosystem that could offer a myriad of environmental benefits. Besides helping to filter pollutants, increasing thermal insulation of the roof, and reducing storm water runoff, the roof top garden sets forth a complete productive cycle. Food will be grown, consumed, and ultimately returned to the cycle in the form of compost on the premises.

The design features an alternating landscape of hard and soft surfaces that knit together to form a series of platforms. A prefabricated, suspended metal blanket and specialized recycled plywood frame outline a series of grow channels which are filled with an engineered growth medium (which is much lighter than natural soil). The undulating surface negotiates the space around existing HVAC and mechanical rooftop equipment, offering a 100% usable surface that is tiered for maximum solar exposure.

The prototype garden, part of the Los Angeles Community Garden Council program, is planted with fruit trees and vines, and herbs and vegetables that will be tended and used by residents and the chefs of the well-known ground floor restaurant, Blue Velvet.