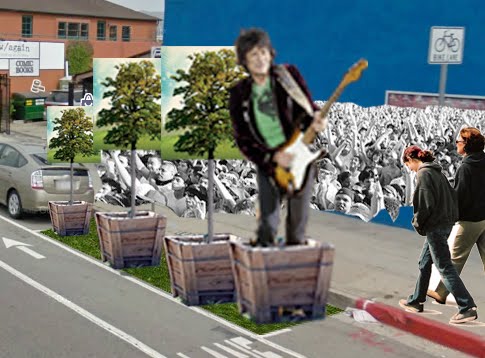 It's baaaack! We're pleased once again to join our friends at Park[ing] Day LA as we transform a lowly concrete parking space into an eco-friendly pocket park on Friday, September 17th from 10am to 4pm. We will once again be in front of neighborhood fave, LOCAL restaurant, at 2943 Sunset Blvd. Come by, order lunch, have a lemonade, and enjoy the fruits of our labor.

This year, we plan to build a public performance space, with the help of talented architect Christian Chaudhari. Got a band? A guitar? Some bongos? Let us know! We're looking for musicians to play in our park all day.

Can't make it to our park during the day? Head to the Echo Park Film Center at 6pm where they'll be showing the movie Breaking Away in their ride-in theater park!

Not familiar with Park[ing] Day? Here's more:
Too often, when people think of Los Angeles they envision a maze of asphalt, smog and traffic congestion. The automobile reigns supreme and as a result one’s ability to navigate through the City becomes compromised with the burden of too many vehicles clogging the road. Sidewalks have been narrowed and opportunities for open space, parks, civic plazas and public places have been sequestered into the hills, which unfortunately are often inaccessible to anyone without an automobile. Despite being home to one of the largest urban parks in North America (Griffith Park), Los Angeles significantly lacks adequate & accessible open space, urban parks, plazas and civic centers.

In 2005, the Rebar group, a small group out of San Francisco, opened eyes worldwide by transforming a metered parking spot into a park-for-a-day in an effort to make a public comment on the lack of quality open space in American cities. Their goal was to reprogram the urban surface by reclaiming streets for people to rest, relax and play and to:
Posted by marissa at 6:29 PM