It still stings for us to think about the great urban designer John Chase, who passed away last year. As the urban designer for West Hollywood for 14 years, John left an indelible mark on one of LA's most vibrant cities, and as an enthusiastic friend of de LaB, he supported and nurtured our little organization into a thriving community. He's seen above with Rico Gagliano and Frances Anderton just before he read at our City Listening II event last summer. He's the one on the right, and yes, indeed, he does have his facial hair dyed blue for the occasion.
We've been wanting to do something special to help remember John and were thrilled when Frances (his best friend) asked us to partner with her on a very special event that would bring John's West Hollywood to life. On May 21, John's birthday, we're joining forces with KCRW's DnA: Design and Architecture, and the LA Forum, who has set up a fund in John's name, to lead a tour through the city, stopping at all the buildings, parks and places that John helped bring to life. More details will be coming soon, but we want you to save the date and time, and get ready for an incredible walk through West Hollywood to honor one of our favorite Angelenos. 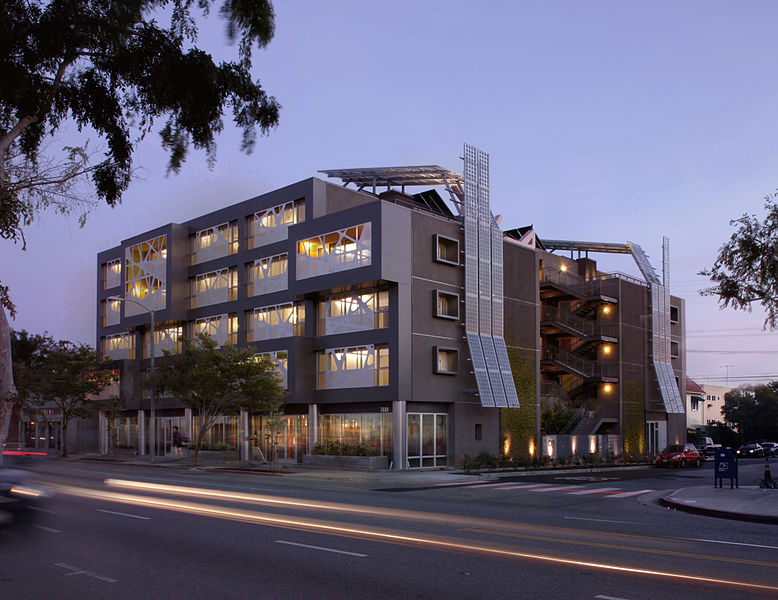 John Chase's West Hollywood: An Architectural Walking Tour
Saturday, May 21, 2011
10:00 a.m.: Tour departs from West Hollywood Gateway
7100 Santa Monica Blvd, West Hollywood
Meet in front of the Starbucks in the courtyard
5:30 p.m.: Drinks at Barney's Beanery
8447 Santa Monica Blvd, West Hollywood
You can take the 704 or 4 bus back to the start
Presented by KCRW's DnA: Design and Architecture, design east of La Brea and The Los Angeles Forum for Architecture and Urban Design
The late John Chase was the City of West Hollywood's urban designer for 14 years. During that time, he made his mark on every corner of West Hollywood, helping transform Santa Monica Boulevard into a pedestrian-friendly strip, shepherding high-quality development, commissioning well-designed signage, and carving out much-needed pocket parks. On May 21, John's birthday, a group of his friends, family, co-workers, and collaborators will lead a walking tour across the city to experience John's legacy. Architects and city leaders will meet the group at the various projects to talk about working with John and offer advice on how designers and developers can collaborate on successful urban spaces. The walk will conclude with drinks at Barney's Beanery, one of John's favorite places in West Hollywood.
Stops include: Formosa 1140, Plummer Park, The MAK Center, Habitat 825, Holloway Park Veteran's Memorial, Sierra Bonita Affordable Housing, 8140 Sunset Boulevard, West Hollywood City Hall, the urban design and streetscape of West Hollywood, a closer look at the dingbats and "exterior decoration" that John described in his books and essays, plus many more (and a few surprises!). The walk will conclude at Barney's Beanery for drinks and more memories around 5:30 pm.
Speakers include: Frances Anderton, Christopher Hawthorne, John Keho, Jennifer Davis, Katherine Spitz, Deborah Murphy, John Kaliski, Margaret Crawford, Lorcan O'Herhily, Richard Loring, Merry Norris, Andy Liu, Wade Killefer, Pat Smith, Bruce Kaye, and more to be announced.
A printed map of John Chase's West Hollywood designed by Keith Scharwath will be provided by the John Chase Memorial Fund, recognizing a great friend and supporter of The Los Angeles Forum for Architecture and Urban Design.
RSVP here so we can get an accurate headcount. If you RSVP you'll also receive more detailed information via email by Thursday, May 19 about the route, timetable, and where to meet us along the way.
We've also put the itinerary on Tripline, a cool new mapping app (whose offices are in West Hollywood!). You can download the app and follow along there.
Remember if you can't make it at 10:00 a.m., you can always follow us on Twitter at @de_LaB to find us along the way. We will stop for lunch around 1:00 p.m. at the corner of Crescent Heights and Santa Monica Blvd. and plan to finish at Barney's Beanery around 5:30 p.m. for drinks.
View John Chase's West Hollywood in a larger map
Photos: City Listening photo by Monica Orozco; Sierra Bonita Mixed Use Affordable Housing Project for People Living with Disabilities, one of the project John helped enable. Photo by Art Gray via Wikipedia