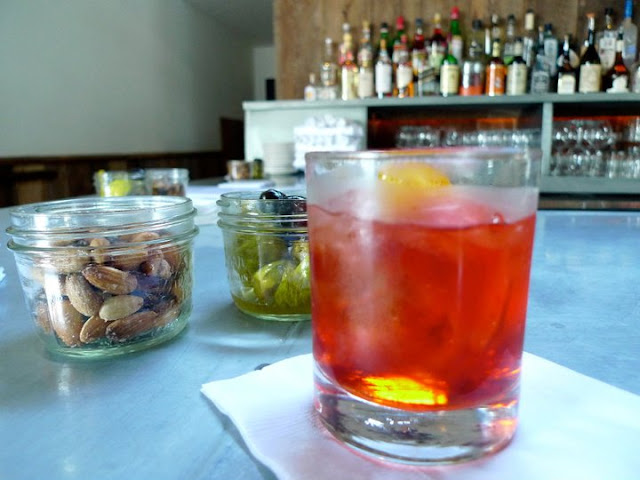 On Monday, May 9th, we gathered around the zinc-topped bar at Osteria La Buca on a formerly desolate stretch of Melrose near Paramount Studios to meet designer Brendan Ravenhill.  After enjoying our Negronis and bar snacks such a pork-roasted almonds and house-pickled vegetables (as well as some killer pizzas), Brendan explained how he transitioned from designing a simple bottle opener to an entire restaurant. Owner Graham Snyder spotted Brendan's bottle opener in an article and called him to meet the designer. When the two met, they discovered they shared a similar philosophy around their passions. Brendan believes in the integrity of materials and allowing them to shine, while Graham brings a parallel philosophy to his restaurant, preferring to let local ingredients sing, rather than needlessly adorning them. While most of the renovation was cosmetic rather than architectural, Brendan knocked down a wall as La Buca took over a third storefront for its expansion. He also designed all of the seating, including new banquettes, chairs that mimic the barstools (some of the most comfortable hard-backed stools we've ever sat in), and the round-topped stools at the communal table that allow diners to swing easily to see what's going on in the rest of the restaurant. Brendan also prefers materials with a natural patina, or surfaces meant to age with use. The zinc bar (which Brendan said had an "awkward adolescence" its first 3 months) was meant to stain over time, much of the wood is recycled barn wood with naturally variegated tones, and the stools are meant to withstand shoe scuffs. The renovation (which closed the restaurant for all of eight days in April) was also a family affair, with Brendan's wife contributing the hand-painted signage both inside and on the exterior of the restaurant. And most of the furniture and lighting manufacturing was done in LA, which Brendan notes has a wealth of great fabricators.

Check out some more photos here and here.

Next up, please join us for our memorial walk for John Chase on May 21st. And get ready for more great events in June, including our annual Design-n-Dim Sum Bike Ride!
Posted by marissa at 3:14 PM